An Abundance of Fugging 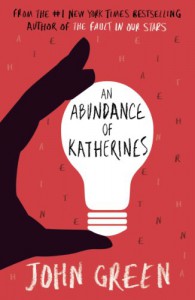 This was my second journey in my quest to find out why so many people think John Green's books are so awesome. I still have no idea. Not that the book wasn't enjoyable, because it was, but it was a pretty average level of enjoyable.

An Abundance of Katherines is a cute, fluffy, trope-filled rom-com that I probably would have enjoyed more if it had been written in first person. That way I could've pretended that the many, many author intrusions were actually Colin's inner monologues. Seriously. This book would be more aptly named An Abundance of Author Intrusions. They outnumbered the Katherines by a huge margin. It sometimes felt like I was reading transcripts of Mental Floss list videos. The characters are either overly quirky or under-developed and not particularly "real", but I've been to rural Tennessee and can at least attest to the likelihood of finding pink mansions in tiny podunk factory towns.

Things I got really tired of before the end of this shortish book:

2. Author intrusions. At no point in the book could I get lost enough in the story to forget that a real person had written it, because that person kept butting in to explain stuff in footnotes, in the prose, and even in the dialogue. There's something incredibly disenchanting about hearing a 30-something-year-old man speaking through the mouths of teenagers.

3. Hyphenated-phrases-that-didn't-need-to-be-hyphenated. Granted, there weren't nearly as many of these as there were fugs and author intrusions, but nearly every single one pulled me out of the story to wonder why the hell they had to be hyphenated.

In the end I thought it was just okay. It wasn't terrible, but it's not that memorable either. I'll probably have forgotten most of it by this time next week.