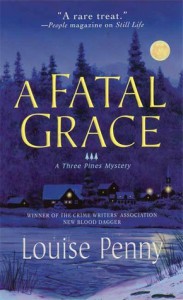 I was marginally less enchanted with this second installment of the Chief Inspector Gamache series than I was with the first, and I do mean marginally. The prose is still beautiful, the characters still real and engaging. My problem was that so much time was spent repeating things and dwelling on how horrible the murder victim was that after a while it felt like overkill.

I noticed something else while I was reading which may be attributed either to the author's genius or my own over-analyzing. The murderer in this book is pretty easy to spot. The pertinent clues are laid out for the reader fairly early on and you don't have to be all that observant to pick up on them. I spent half the book kind of gloating because I'd pegged the guilty party ages before the brilliant Gary Stu Gamache (whom I still adore) solved the crime. I usually get annoyed when I can spot the murderer early on because I'm there for the mystery, but this time it gave me a sense of accomplishment.

I realized then that I'm not here for the mystery. It's a nice bonus, but I'm here for something else. I love (most of) these people Louis Penny has created, I love the flow of words she's put to paper. I'm here for the entire experience that is a Chief Inspector Gamache novel, and I'm unpacking my bags and staying.