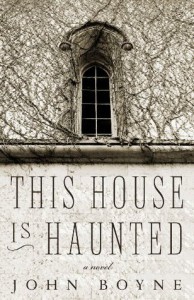 "Hi, I'm Eliza, and I'm unattractive. Bless my lacy knickers, there's a ghostly face in the mirror! Oh, no, false alarm. It's a reflection of my mum's portrait. She was much prettier than me. I'm not attractive. Great googly moogly, there's my mum's ghost in the fog! Oh, no, false alarm. But she could totes be mum's sister. Because she's pretty like mum. I'm not. Have I mentioned I'm not attractive? While my face doesn't curdle milk, my milkshake brings no boys to the yard. Because I'm unattractive. Alas."

Eliza got less likable for me the further I read. She's kind of hypocritical and has really poor decision making skills. Also, she's unbearably slow. One of the things that makes me think this book is satire is a crack another character makes about how long it takes Eliza to figure things out, things that others figured out in a fraction of the time. And, of course, the endless mentions of her unattractiveness. Her fantasizing about every cute guy she meets (including the married ones) was amusing, though they usually end with yet another reminder that she's unattractive.

The haunting itself was a bit lackluster. All the elements were there, laid out in the usual predictable pattern, and yet it all fell rather flat for me. Like an angry ghost paint-by-numbers with only one color. It was bland. I paid $.99 for it and got at least that much enjoyment from it, but I'm not rushing out to get more John Boyne books.