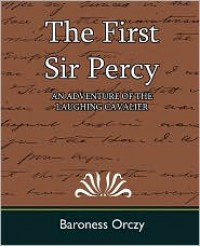 This sequel to The Laughing Cavalier is much the same as its predecessor. Diogenes is still the cleverest, manliest of men, Gilda is still the tiniest, most delicate of flowers (she did, however, manage not to swoon for most of the book), and the villain is even more villainous than ever. In case it wasn't clear in the last book that Stoutenberg is the vilest of the vile, in this volume he takes great pains to point it out by swearing on Satan, Beelzebub, the devil and all his minions, etc., just to remove any doubt. Because evil villain is evil!

To sum up, this is more of the cheesy historical romantic adventure goodness that Orczy excelled at, though it could have been a good deal shorter. Orczy was terribly allergic to getting to the point, or so it seems at times.

I was forced to rely on my MobileReference collection for this, and while it was still full of (sometimes baffling) typos, it at least wasn't missing any chapters. Still, I will in future avoid purchasing any titles by MobileReference (though I fear I may already have some purchased around the same time).