Dreams of Gods and Monsters 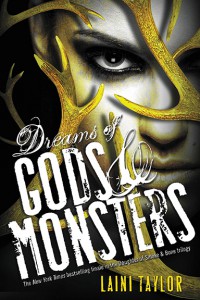 This is the book in which Laini Taylor slipped off the magical-unicorn-shaped pedestal of epic storytelling I had placed her on and proved she was a mere mortal after all. I still think she's one hell of a talented author, but after the buildup of the second book my expectations were so high they achieved orbit. I sort of fell victim to my own hype. This is a good book, but it wasn't as earth-shatteringly good as I expected. I set myself up for disappointment. Wistful, bemused disappointment.

Things that might have made this a five-star book for me:

1. If Eliza's character arc had been teased throughout the series instead of crammed into this one book. Seriously, this character has a whole book's worth of potential development and I feel like I got the super-condensed Reader's Digest version.

2. If there had been less of Karou and Akiva inwardly agonizing over their relationship. A lot less. Because ye gods, it felt so repetitive.

3. If the epic story hinted at in the last chapter had actually been the focus of this book. Really, any sort of epic confrontation would have been preferable to the anticlimactic conclusion of the confrontation with Jael that was built up as the focus for so long.

4. Less deus ex machina. This ties into #3 (and #1, sort of). The writer's convenience went to a whole new level in this book. I know we all wish for one of those "I WIN!" buttons in real life, but reading about people using them is less interesting than more mundane methods of conflict resolution.

I mean, come on! A major battle was almost literally won by the snap of a single person's fingers.

Like I said, it's a good book. But I'm greedy and I wanted more.

If Laini Taylor ever writes a book about that epic story she hinted at, I am buying the living daylights out of it.