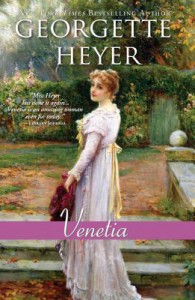 Chapter Eight: In which Oswald imitates Damerel's Corsair more accurately than even he imagines. Hahaha! Poor Oswald! If only someone else had been at the brambles in order to inflict the same fate on Damerel!

Speaking of Damerel, Moonlight Reader posted an update with excellent insight into the characters of both Venetia and Damerel. They're two lonely people who each finds a kindred spirit in the other. I had glimpsed this in a sideways, squinty-eyed way, but I had utterly failed to grasp it in any meaningful manner. I did feel a pang of sadness for Venetia that her life had been so solitary, but it was immediately overshadowed by another pang that her first real friend should be the douche who mauled her in the brambles. I didn't consider Damerel's loneliness at all. I'm keener than ever to see his reformation unfold.

I've noticed my updates are pretty much 99% me whinging about the sexist aspects, but that's not accurately representing my reading experience. I'm having quite a bit of fun with this book. I roll my eyes at the men's behavior and snort in disgust at the women's unflattering views of their own gender, but most of the time I am giggling at the banter and the absurdity of it all. That hasn't shown up in my updates because when I'm having that much fun I don't think to stop and post about it; I just want to keep reading. I had a similar experience with Why Shoot a Butler, come to think of it. Frank Amberley's a total douchecanoe, but I enjoyed that book immensely.