The Moth in the Mirror 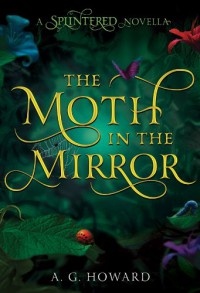 This review contains spoilers for Splintered. If you haven’t read it yet, proceed at your own risk.

Despite what the title might lead you to believe, this novella is less about Morpheus and more about what kind of assholery Jeb got up to in Splintered whenever he and Alyssa got separated. In between a brief intro and outro featuring the interesting and complex Morpheus, the reader is “treated” to such scenes as Jeb being an asshole and torturing a sprite for information, Jeb being generally useless and reflecting on his insecurities and having yet another dick-measuring contest with Morpheus, and Jeb being an asshole even when he’s trying to be noble and self-sacrificing.

I think I know what Howard was going for when she showed us how Jeb came to the decision to sacrifice himself to save the Ivory Queen and, by extension, Alyssa. To me, it made him look more selfish than selfless as he doesn’t even think of his own family (who depend on him emotionally and financially) at the pivotal moment. To be clear, I still think Morpheus is also an asshole, but he’s an interesting asshole. Jeb’s too two-dimensional despite Howard’s attempt to give him layers.

Other than the brief insight we get into Morpheus’s character, this story’s only redeeming feature is that it’s written in third person past instead of first person present. It gets two stars from me, one for the fifth of the story that actually featured Morpheus, and one for the much-improved narrative style. If you like Jeb, you’ll like this story a lot more than I did. If you think Jeb’s an asshole, you can help me think up more appropriate names for the story. Like Asshole in Wonderland. Or The Douche in the Mirror.