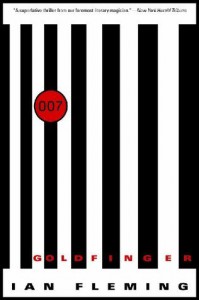 Moonraker II Goldfinger: Because entangling Bond in a nefarious plot masterminded by the ginger-haired millionaire with a bizarre face whom he caught cheating at cards worked so well the first time.

How often in his profession had it been the same – the tiny acorn of coincidence that soared into the mighty oak whose branches darkened the sky. And now, once again, he was setting out to bring the dreadful growth down.

Goldfinger didn’t do much for me. At all. Aside from the recycled flavor of the villain, I found the book slow and boring and overwhelmingly “meh”.

I’m starting to see how limited Fleming’s bag of tricks was. At least half the women so far who haven’t immediately responded to Bond’s extra-manly manliness have rape in their backstory. Good thing Bond is there with his magic penis to cure them of their reticence. How awesome would it have been if Pussy had run off with Tilly instead of Bond? She might have, too, if Bond hadn’t interfered. Oh well.

And is it just me, or would Pussy Galore and her Abrocats have made for a much more interesting book? Not that I would have trusted Fleming to do it justice. Someone should get on that, though. Pronto.