Percy Jackson and the Battle of the Labyrinth 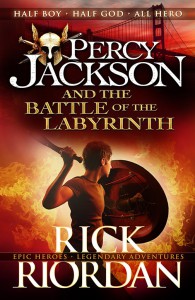 In lieu of a proper review (which I just haven’t felt like doing lately), I present to you a Percy Jackson Checklist:

☑ A quest is given; Percy’s participation is crucial.

☑ Other characters have to school Percy on Greek mythology because apparently he can’t be arsed learning all this stuff his life might depend on him knowing.

☑ Annabeth is conflicted and angsty.

☑ Kronos is six steps ahead of everyone.

I could probably keep going and expand this into a Percy Jackson Bingo Card. But, much like Percy learning Greek mythology, I can’t be arsed.

I wasn’t thrilled with the advent of the love triangle (square . . . ish?) in this book, even though it meant Percy finally got a love interest not related to him. I will not be fooled into thinking that Percy will end up with anyone other than Annabeth, his first cousin once removed. Bleh. I’m still enjoying the series overall, but this kissing cousins thing does dampen my enthusiasm a bit. I should’ve kept reading this series as it came out. You know, before I realized pretty much everyone at Camp Half-Blood is related to each other.