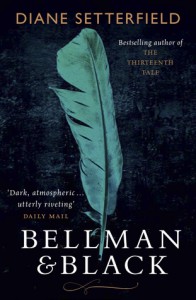 I have a bit of a love/apathy relationship with Diane Setterfield’s novels (all two of them). I think her prose is gorgeous. I think her plots and characters are boring. But enough time passed between her first novel and her second that I only remembered the former and forgot about the latter until I was reminded as I plodded through Bellman & Black. If she takes the better part of another decade to write her next book, I’ll probably forget again.

This book was originally advertised as a dark, atmospheric, Gothic ghost story. I guess enough people complained, because my mass market paperback version omits the “ghost story” part of the description. And rightly so.

This is not so much a Gothic ghost story as it is (in my opinion) a character study about a Victorian era businessman-savant who probably suffered from paranoid schizophrenia and maybe a congenital heart defect. Included is a bunch of bonus content on how rooks are pretty much vindictive avian assholes.

If you want to read about how a Victorian textile mill might’ve been run in tedious, excruciating but beautifully written detail, or if you’ve ever wondered how one might go about building a mourning emporium from the ground up in Victorian London, boy howdy! this is the book for you. If you want to read a chilling Gothic ghost story, pass on by, folks. Nothing to see here.