Guardians of the Whills 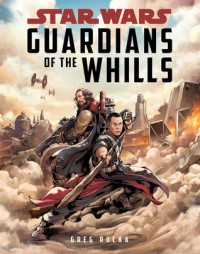 I was excited to get my hands on this book for two reasons. Firstly, it features my second-favorite Star Wars bromance. Secondly, I was hoping for more info on the Temple of the Whills and its Guardians and more insight into post-Jedi-purge Force beliefs. In retrospect, it was silly of me to hope for that kind of depth in a 234 page Middle Grade novel. The book delivers on the bromance, but not so much on the other stuff. I enjoyed it, but now I need to watch Rogue One again because I can’t remember if Baze or Chirrut ever mention a past association with Saw Gerrera and his extra-rebellious rebels.

Diogo Saito’s illustrations are a nice addition, though I wonder if they were commissioned before or after Rogue One was fully cast. Chirrut looks passably Donnie Yen-like, but Baze looks nothing like Wen Jiang. He looks like some random beardy white dude.