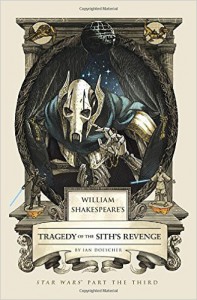 After three books, I am still stunned by how much more sense the Star Wars prequels make as Shakespearean plays. I would pay real money to see this whole series of adaptations acted onstage by classically trained thespians. Get on it, Disney, and make it snappy. I want to see Patrick Stewart in the cast list, and that blessed man isn’t getting any younger.

As with the previous book, I have to dock it half a star after once again finding myself wishing Samuel L. Jackson wasn’t quite so prolific. (I Like SLJ! I shouldn’t be feeling this way, Doescher, but you just didn’t know when to quit!) I can’t say for sure if SLJ’s movie titles appeared in the first book. If they did, it was done so smoothly I didn’t notice. Some movie titles must have been easier to work in than others, and unfortunately the more difficult ones were easy to recognize for what they were, even in cases where I’d never seen or heard of the movie. Did you know SLJ was in a movie called Trees Lounge? No? Me neither.

I almost added the half star back after the last scene, but not even the mental image of Vader shouting “Nay!” in James Earl Jones’s voice could make up for the massive distraction of the gratuitous SLJ movie title Easter egg hunt.

It is a pretty great mental image, though.