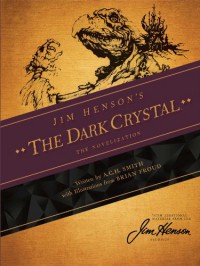 Full disclosure: At least one full star of my rating is because this was one of my favorite movies when I was a kid and my nostalgic love for it in all forms is strong. If I make an attempt to be objective, I have to admit that the book is a tad on the dry side, and some of the descriptions seem out of place and serve little purpose. Aside from that, the story benefits a great deal from being told in novel form.

You know that bone-dry “Jen is the chosen one” expositional voice-over at the start of the movie? Not here! Those confusing rituals of the Skeksis and Mystics (actually called urRu and never referred to as Mystics in the book)? Explained! All that Skeksis political positioning following the death of the emperor? Also explained in greater detail with a clear delineation of factions! I don’t know how many people care about Skeksis politics, but all of that palace intrigue in the movie makes a hell of a lot more sense to me now, so I’m glad it’s covered. My next viewing of the movie will be enhanced as a result of reading the book.

This hardcover includes the extensive editorial notes Jim Henson sent Smith after reading the novel’s first draft. While interesting, this section is super dry. Don’t go in unless you’re well hydrated. Also included are a bunch of Brian Froud’s conceptual sketches strewn randomly throughout the book instead of all together at the back in a civilized appendix. Someone in the layout department at Archaia thinks interrupting the story with sketches of usually unrelated subjects is a great idea, apparently.