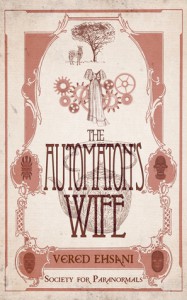 In keeping with the first book, The Automaton’s Wife pretty much ignores its title and cover copy and does its own thing. The automaton doesn’t show up until Chapter 20 (of 34) before promptly disappearing for several more chapters and doing zero “return[ing] for his wife”. The proposal takes place at the beginning, and then the would-be suitor is mostly absent for the rest of the book. A dead body shows up at the start, and then isn’t mentioned again until near the end of the book when the serial killer plot finally shows up. The events that take up the bulk of the book aren’t even alluded to in the cover copy, and I’m wondering if the person who wrote it even read the damn thing. It borders on false advertising.

Beatrice is still bitchy, but in this book she actually gets called on it (as regards her paranormal bigotry, anyway), which was good to see and actually led to a glimmer of self-awareness and some character development. (I hope it sticks.) The editing is still inadequate, which is a terrible shame because this would be a really fun series if a good editor or two could clean up all the repetition and slightly-wrong idioms and awkward syntax. As is, it just really gets my pedantic goat. At least Bee actually referred to the Stewards as her aunt/uncle/cousins in this book. She danced around their filial connection in book one, only referring to Mrs. Steward as her aunt twice in passing, and it was the weirdest thing.

I’ve got one more book to go, and then I’ll probably be done with this series regardless of whatever pseudo-cliffhanger the third book ends on. It’s entertaining, but not enough for me to lock my inner pedant in a closet for all seven books.

I read this for Halloween Bingo 2018, using my first Wild Card for the Creepy Carnivals square. A circus gets a brief mention, so it totally fits! :P 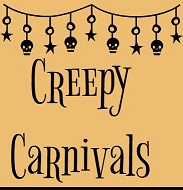