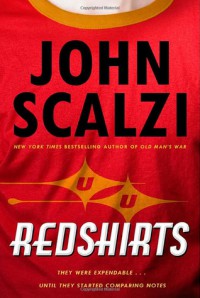 After I finished the second book in the Inheritance Cycle, I said I needed to take a break and read something that wasn’t (ripping off) Star Wars. So what do I do? I pick up a book ripping off—in a very self-aware and satirical fashion—Star Trek: The Original Series.

I have no regrets.

This book is freaking hilarious. Just ask my poor husband who was frequently distracted by my snorts, giggles, and belly-laughing. (The phrase, “Keep it down over there!” was uttered at least once and only partially in jest.) Characters inside a sci-fi story noticing how absurdly dramatic their lives (and deaths) sometimes are and picking apart the bad science and clichés and overused tropes they have to deal with is a brand of humor that really appeals to me. I thought Scalzi did a damn fine job of it.

I do have minor gripes (of course I do). Sometimes it felt a bit dialogue heavy, and the main story ending at the 70% mark was a bit rude, and the three codas at the end were interesting but felt like a let-down somehow. Too big of a tonal shift, maybe. I don’t know. It also took me longer than it should have to separate some of the character names (Dahl and Duvall, Hester and Hanson). Honestly, given that they were all “extras” on the Intrepid’s crew, I don’t know if that’s a bug or a feature. Oh, and I resent that one missing period I noticed. (HOW DARE. ONE MISSING PERIOD.)

Overall, I enjoyed it a lot and I would enthusiastically recommend it to fans of Star Trek: TOS who aren’t above making fun of the things they love.