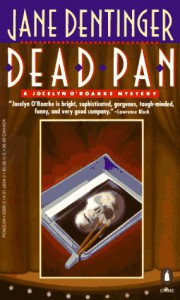 Jocelyn heads across the country to LA to co-star in a friend’s made-for-TV movie. The usual murder and on-set accidents ensue, but somehow this doesn’t ruin her Hollywood career like it did her off-Broadway career. (I mean, she’s no Jessica Fletcher, with whom the least acquaintance could prove fatal, but how is she still getting jobs???) With the TV movie gig, Jocelyn also gets a new love interest who is allegedly the only heterosexual male hairdresser in all of male hairdresserdom, I guess because we just couldn’t leave all the gay stereotypes behind in New York. The mystery was better than book 3’s and the attempts at Black American dialogue were restricted to a less badly stereotyped character and a brief impression of Mammy from Gone with the Wind, so there’s that going for it. But damn if Jocelyn isn’t still getting on my nerves. In my eyes, she has yet to redeem herself from that terrible book 3 ending. (Yes, I am still bitter about that.)