CORRECTION: Cup Day is Door 3 this year, please pardon the goof and my further breaking of MbD's spiffy formatting. 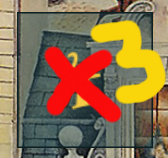 Please excuse the caps. It's my first Festive Tasks guest post. I'm a tad excited. Ahem! This is a partial opening of Door 3, Melbourne Cup Day, because there's no challenge in picking your ponies after the race is over!

Task 1:  Pick your ponies!  MbD Darth Pedant will post the horses scheduled to race; everyone picks the three they think will finish (in any order).

Darth Pedant here. By dint of being a former pony (and possibly living in the correct country and time zone for the task), I've been asked to step in for MbD to announce the field for the Melbourne Cup, the Race that Stops a Nation. (That's no joke. Australia literally declares State and National holidays for sporting events.)

The rules for the task are the same as last year:

Anyone playing the 24 Tasks of the Festive Season who wishes to participate in this task, pick your three favourites to place 1st, 2nd and 3rd and tell us in the comments below.  It's not necessary to name them in order; as long as any of the three horses you chose finish in the top 3, you win!  Each person will receive one point for each horse they chose that finished in the top 3. A point will also be awarded to the person whose chosen horse came in last.

If anyone chooses a horse that's been scratched before race time (rare), they may choose a replacement horse up until the deadline - please EDIT your original comment to choose a new horse; a new comment may, if there are a lot of participants, get lost in the shuffle.   Alternatively, you may name your three horses and a replacement choice right from the start - just make sure to specify in your comment which of your picks is the alternate.

The race that stops a nation begins at 3:00pm, November 5th Australian EDT.  This equates to:

The deadline to submit your guesses will be 2:30pm AEDT on the day of the race (the 5th).

The winners will be announced as soon as results are in, and in the event that someone here guesses all three correct horses (their 3 come in 1st, 2nd and 3rd), that person will receive 1 free book - print or digital - of their choice, valued at up to $25USD.

Below are the horses in this year's race, in no particular order (because the order kept changing when I refreshed the page, argh, why are sports?). It's not as pretty as when MbD does it, but I did my clueless best with the fancy html template she gave me. (My best not to break it, that is. I partially succeeded. Yay.) Comments are not mine; I found them here along with the jockey silks and much more detailed horse bios. Or if you, like me, are utterly clueless about the world of horse racing, here's a helpful guide written just for us, courtesy of MbD's impressive Google Fu. (And by helpful I mean "helpful".)

Why he can win: Proven world-class stayer who won the 2018 Melbourne Cup.

Why he can't win: A likely 6-6.5 kilogram weight increase and history suggests it is extremely difficult to win the Melbourne Cup twice.

Why he can win: Damian Lane was so confident in his staying power and speed, he convinced the owners to have a crack at the Melbourne SC.

Why he can't win: Will carry more weight than all but one of the past 12 Cup winners and has never been tried at 3200m.

Why he can win: Sir Michael Stoute has a very high opinion of him and he has some good form around some absolute stars..

Why he can't win: Has a tendency to be placed in Stakes races, rather than winning.

Why he can win: Has some form around gun European stayers Stradivarius and Kew Gardens.

Why he can't win: The Melbourne Cup will be his first start in Australia.

Why he can win: Has elite staying form and with great stable.

Why he can't win: Difficult to win the Melbourne Cup if the horse is first up in Australia.

Why he can win: Owner Lloyd Williams has won the Cup six times before, once in conjunction with trainer Joseph O'Brien when they triumphed with Rekindling in 2017.

Why he can't win: His form this season has been patchy.

Why he can win: He was dominant in the Ebor and is racing in peak form as a 7YO.

Why he can't win: The Ebor hasn't supplied many Cup winners and he's yet to be tried over 3200m.

Why he can win: He has form around the best horses around the world and will make his own luck

Why he can't: He doesn't win very often

Why he can win: At his best, he is a top class performer, and he was only beaten five lengths in last year's race

Why he can't: He just doesn't seem to be in the same form as he was 12 months ago

Why he can win: Has the right trainer/owner combination for Cup success.

Why he can't win: Seven year-olds have won the Cup just 11 times in the race's history.

Why he can win: Horse thrives in Australia and ran a great 3rd in last year’s race.

Why he can't win: Hard to imagine it can make up 3-4 lengths on the likes of Cross Counter as a seven-year-old.

Why he can win: Horse with clear upside and is proven at the 3200m distance.

Why he can't win: Query about an injury that ruled him out of the Autumn and has to make up 3-4 lengths on the likes of Cross Counter and Marmelo.

Why he can win: Has produced a commendable effort behind another serious challenger in Mustajeer at York.

Why he can't win: Will be his first start in Australia.

Why he can win: He's progressive and has already shown some decent form in Australia

Why he can’t win: He has failed to show up at top-level in Europe and there is a query over that Moonee Valley Gold Cup form

Why he can win: He's an in-form stayer and one of the top fancies for the Cup.

Why he can't win: A local hope, he has a lot of competition from serious internationals.

Why she can win: She's has top class form in Ireland and the USA

Why he can win: Hard to make a case but that second to Kew Gardens is good European form

Why he can’t win: Has showed nothing this campaign to indicate he is going well enough to consider

Why he can't win: He hasn't shown enough in Australia to think he can be competitive in a Group 1 handicap

Why he can win: Tough, consistent galloper who is proven at the track and over long distances. .

Why he can't win: Yet to be tested against elite company.

Why he can win: Clearly has abundant talent and profiles very similar to last year’s winner.

Why he can win: Has form around gun European stayer Stradivarius, who was only beaten for the first time in almost two years on October 19 2019.

Why he can't win: Has not win at Stakes level.

Why he can win: Consistent stayer who enjoys further distances as shown by his fighting second in the Caulfield Cup.

Why he can't win: He still has to make the final field for the Melbourne Cup.

Why she can win: Her best form is right up to this and she has been to the 3200m before

Why she can’t win: She was beaten last year and is not in the same form this time around

The Chosen One (NZ)

Why he can win: He is still a horse on the way up and he gets in with an excellent weight

Why he can't win: The 3200m at top level is a query based on both his pedigree and the way he finished off the Caulfield Cup.

Who did you choose and how/why?  Tell us in the comments below.