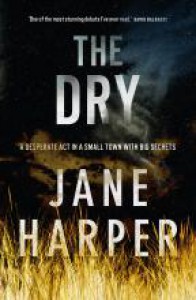 It was probably a bad idea to read a crime novel set in a dying, drought-stricken, rural Aussie town when half my state is on fire and dozens of non-fictional towns are literally running out of water, but oh well. Can’t blame a four-year-old novel for being painfully relevant to current events. Depression practically oozed off the pages, and I couldn’t help thinking that if Kiewarra were real it would be cinders by now.

Depressing realism aside, I thought this was a well-written novel with a decent mystery and an interesting main character. To clarify, the present-day mystery was decent. The past mystery was a disappointing collection of violence-against-young-women tropes. Still, I’m interested enough to seek out more by Harper. I’m undecided if I want to read the sequel, though. Aaron Falk is an interesting character, but he definitely belongs to the class of crime novel protagonists in desperate need of a good therapist. I don’t know if I want to read a few hundred more pages of him not working through his abandonment issues. I hear Harper’s third book is a standalone and also pretty darn good. Maybe I’ll just skip to that one.