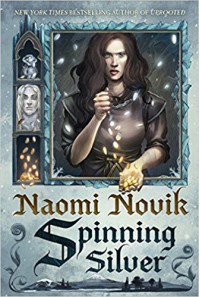 I finished a whole book! Woo! Take that, pandemic anxiety brain! But I don’t feel capable of properly reviewing it, so I’ll just say a thing or two and then do a victory lap of my little dining table or something.

Thing one: I’m not a huge fan of the multiple points of view. Nearly every single POV change derailed my concentration to the point that it was sometimes several paragraphs before I figured out whose POV I was reading. I can at least partially blame this on the whole pandemic brain phenomenon (Focus? LOL! What’s that?), but some of the POVs felt so similar that they really threw me. I had an especially hard time telling Miryem and Irina apart at first. (Irina’s first POV section threw me SO HARD.)

Thing two: The book in general was about a three-star read until the last 120 pages or so when all the threads finally came together. Once they did, HOLY WOW. Some parts of those last 120 pages were so good that I read them over and over again, and NOT because I was having trouble focusing. If Naomi Novik wants to keep writing fairy tale inspired awesomeness, I will happily keep throwing money at her.