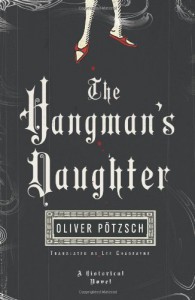 I'm still trying to figure out why this book is titled The Hangman's Daughter. Was this the original title, or did AmazonCrossing decide to  follow the Daughter-in-the-title fad when producing the English translation? This is what I kept asking myself while reading as it became more and more apparent that this story actually had very little to do with the title character. But I digress.

As mysteries go, the story was just okay. The villains are pretty obvious fairly on, despite some feeble attempts at misdirection in the narrative. Agatha Christie it is not. It's not even Cadfael. It's a paint by numbers whodunit with few surprises in a generic superstitious town setting. The moral of the story seems to be that mystery-solving epiphanies prior to the denouement invariably result in serious head injury. (Okay, not really, but there was a definite pattern. Just sayin'.) What sets it a little apart is the character of the hangman, whose occupation puts him in some rather interesting situations.

Jakob Kuisl is a good man with a conscience, which in his line of work leads to a lot of heavy drinking. Being the town executioner means you have to do some pretty terrible things to people you may have known most of your life, and using thumbscrews on a good friend isn't something you want to do when you're sober. He's something of a Sherlock Holmes of his day, with a vast store of knowledge regarding practical matters, herbs and medicines, human nature, book-learning (yes, he can read -- in a variety of languages, judging by his suspiciously vast library), his own Doctor Watson (aka Simon, the university-educated son of the bumbling town physician who used to be -- wait for it -- a war surgeon), and a pipe fetish, but what saves this from being annoying is how often he gets it wrong and/or is outmaneuvered by the opposition. He's no Detective Gary Stu, thank goodness. He's an interesting guy, far more interesting than his daughter, and he's the main reason I want to continue with the series.

As for the writing, it was so-so. There was a lot of exposition and repetition. A LOT of repetition. I have a feeling a bunch of nuance was lost in the translation, and whoever edited the English version wasn't overly concerned with cleaning up repeated word usage and awkward syntax and the like. All of that combined made this "fast-paced historical thriller" not quite as fast-paced or thrilling as advertised, but I was able to overlook its faults for the most part.

So, to recap, plus 5 stars for an interesting, complex main character, minus 2 stars for overuse of cookie cutter mystery cliches and a clunky translation.