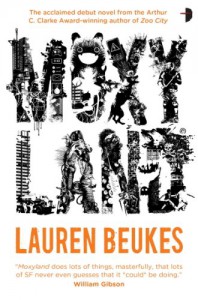 This was my first Lauren Beukes novel as well as my first Angry Robot title. While I was blown away by the quality of the writing (first person present tense that didn't drive me up the wall -- except when Toby was narrating, but that's because he's a wanker), everything else ranged from just okay to disappointing. So disappointing I kind of don't want to talk about it. This review will be short. Ish. Unless I start to rant.

I don't have much to say about the story. The plot felt derivative. Like, really, really derivative. If you've read Orwell's 1984 or Mitchell's Orison of Sonmi in Cloud Atlas, you will be able to predict the ending fairly early on.

Because, you know, we've always been at war with Eastasia.

It wasn't terrible. Like I said, the writing is good quality, especially for a debut novel. I did love the whole aspect of people being so addicted to their phones that a "disconnect" left them helpless and was a punishment to be feared more than jail time. I also loved the unexpected side effects Kendra experienced with her nanotech, but that interesting subplot never had a chance to go anywhere.

Also disappointing were the editing and formatting errors. There were some things I dismissed as only seeming wrong to me because of my general ignorance of South African slang, but some things couldn't be protected by that umbrella. Like the missing punctuation (lots of missing hyphens, like "thirtyeight" in one sentence and "thirty-eight" a few sentences later, missing quotation marks, etc.). And the paragraphs that weren't indented (usually involving dialogue, which, when combined with a lack of dialogue tags, was really confusing sometimes). And the paragraphs that ran on into the next with no separation. And the sentences that were randomly cut off in the middle and continued on the next line. It looked a lot like a bad .pdf conversion, which really should have been caught by now. I mean, did no one proof the Kindle edition? I thought Angry Robot had a good reputation. Or should the closing of two imprints and the fact that the one editor listed on their About Us page has ditched them for a job at Tor.com have been a red flag?

At any rate, I'll be giving both Lauren and AR another chance, seeing as how I already own a copy of Zoo City. Fingers crossed.

Because, you know, we've always been at war with Eurasia.